To make sure her slave did not mess up again, madame Marissa made sure she humiliated him. And she did so cruelly. She used her muddy boots to humiliate him. She made him lick her muddy boots till he had removed all the mud from them. She did not care how he felt. She only cared that he had messed up. And the punishment was to make sure it never happened again.

Princess Serena used her stinky feet to teach this guy a lesson. she forced him to lick her feet and once he had, she forced him to smell them. She did all she could to humiliate him as punishment for calling her names. The mistress wanted to teach him that she was not his equal and by the time she was done with him, he had learned that lesson well.

Mistress Natasha wanted room service but when this loser came to bring her what she wanted, she found he had forgotten and brought the wrong stuff. She was pissed and to make him remember better, she forced him to lick her feet. She also had him lick the soles of her shoes. She forced him to recite what she had told him to bring to her till he brought back the correct thing.

When a slave does not obey what he is told, he has to be punished. This mistress did so cruelly. She taught her slave a lesson he will never forget. She used her dirty socks to punish him and by the time she was through with him, he wished he had not been born. He was choked by the smell but the mistress was having fun so she did it even more.

Mistress Gaia and her friend have a humiliation date

Mistress Gaia and her friend had a date but instead of going to restaurant for the date, they held it in the house and especially in their torture chambers. They had two slaves and they had fun humiliating him as much as they wanted. The slaves were forced to lick and smell their feet before they were trampled cruelly and painfully. It was a great date for them and they planned to do it again.

Mistress BlackDiamoond is a mistress who enjoys total obedience. She did not feel like she had it with this slave so she trained him how to do it. But part of the training involved humiliating him. She made him lick her feet as well as her shoes as punishment whenever he did not do anything she wanted or she had instructed him. In due course, he understood all she wanted.

Mistress Sue did not like what her slave had done when she sent her to buy her new supplies. She had bought her own stuff including make up and had not even bothered to ask her despite the fact that she was using her money. She was fed up and she trampled her in anger and made her lick her feet as well. She cruelly tortured her to teach her a lesson.

Mistress Candice has a forgetful slave. When she came back from her morning run she found he had forgotten what she had told him to do. She was pissed and she had to make sure it did not happen again. She was now fed up and had to punish him. She used her feet to do it and she made him lick her feet which were full of sweat and were smelly. 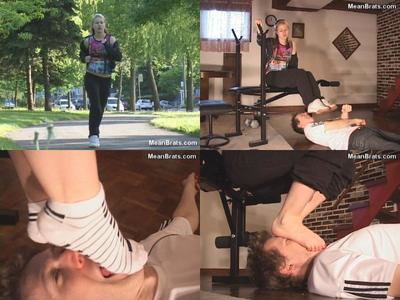 Mistress Natasha wanted to push her slave to his breaking point. She wanted to break him and then build him up the way she wanted. So she started by humiliating him and torturing him. The humiliating part was when she asked him to lick the soles of her shoes. The torture part was when she had him shirtless outside in the freezing cold as it was snowing. He was licking her feet shirtless.