All articles tagged with "Domination"

Lady Zora wanted to trample a guy in a short time. She did not have time to go out and get a loser for herself. So she looked for a broke guy on the internet and she found one who was willing to do anything for money. She had fun trampling him with her high heels and she had a great time torturing him but at least she paid him.

Mistress Suzanna wanted to teach these naked losers a lesson and that is why she chose to teach them a lesson they had never been taught before. The mistress used high heels as well as her bare feet in intervals to trample them and make them cry. They were lying on the grass and they were itchy but she did not allow them to scratch any part of their bodies.

Mistresses torture loser in the woods

Mistress Valeria and mistress Nicole wanted to take this loser to the woods to torture and punish him there. They wanted a place where he could cry however much he wanted and no one would come to his rescue. The forest was perfect and they tortured him using muddy feet which he had to lick clean before he was trampled all over his body. He was so tired and humiliated that he did not cry that much.

Mistresses dominate their slaves to strengthen them

Mistresses Suzanna, Ruby, and Inka felt that they had weak slaves and that did not sit well with them. They wanted to have slaves who were strong so they agreed to trample them in an effort to strengthen them. And that is what they did. The mistresses used their high heels to trample the naked slaves and they did it together to make it even more painful for the slaves.

Mistress Natasha was about to go out but she noticed that her sneakers were not clean and she had to do something about it. This guy knocked on her door and he was a sort of stalker to her. So she used him to clean her shoes. And she used his tongue to do it. He had to lick them until they were as clean as she wanted them to be.

Mistress Luna was conned of her hard-earned cash and she had to get it back. That is why she chose to take this guy to the woods. She placed him down on snow while he was naked and she trampled his balls. She was not going to leave anything to chance and that is why she came out guns blazing. He gave her the money that very day as he did not want a repeat of what she did to him.

Madame Marissa was used to trampling on this guy with her high heels. He oftentimes cried and told her to consider a less painful method to do it. The mistress felt pity for him and she agreed to his request. She trampled him with her bare feet but she told him it would not be any easier. She proved it when she trampled him today and it was still painful.

Mistress Dana did not want to tease this guy. Instead, she told him to look at her and fantasize about fucking her and use it to jerk off. He hesitated and she did not like that. So she threatened to use her high heel boot to trample him all over including on his balls. He was scared and he used her jerk off instructions to cu because he did not want to be trampled.

Goddess Nika wanted to go to bed but she remembered that she had dirty feet. She did not have a choice but to clean them and she used this loser to do it. Goddess Nika made him lick them until they were clean before she went to bed. The mistress had to make sure they were as clean as if she had washed them and he did that for her. 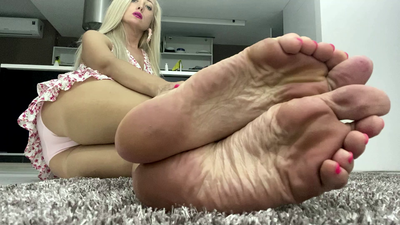 This stranger tried to catcall mistresses Krush and Serena. He thought it was a fun thing to do and he felt it was harmless. But it brought a lot of misery to him as the mistresses used their feet to trample him and make him regret why he had catcalled them. He was trampled and choked as they facesat on him and kicked him. He never catcalled anyone after that.