All articles tagged with "Foot Worship"

Mistress Megan's slave licks her feet to punish himself

Mistress Megan came into the house and before she sat down, her slave was already on his knees licking her feet and her shoes. She knew he must have messed up because that was her favorite way of punishing him. She had had such a great day that she did not want it ruined by a slave. So she made him lick her feet and her high heels and she took it as if it was for fun and assumed it was not because he had messed because she still did not know what he had done wrong.

Mistress Serena has sexy feet and she loves them being pampered. She got her boyfriend to pamper them today by denying him sex. She had asked him to lick and rub her feet but he refused. She did not say a word. She waited until he wanted to have sex and she denied him. He had to lick her feet and rub them before anything sexual could happen between them.

Mistress Natasha was interested in this guy and she had started to fall for him. But she surprised him in his house today and she heard him talking to a friend on the phone that she was just a booty call for him. She was pissed and she humiliated him by making him lick her dirty soles. She trampled him before she dumped him. She could not stay with someone like that.

Mistresses torture guy until he okayed their deal

Mistress BlackDiamoond knew that this guy held the keys to the success of her project. He had the power to okay it or shut it down. She could not let him shut it down so she went with her business partner to see him and when they sensed he was a little hostile to them, they trampled him after stripping him naked. They crushed his balls until he okayed their deal.

Madame Marissa had a bet with her boyfriend and she won it. They had agreed that whoever won it would do anything he or she wanted to the loser. She chose to crush his face with her ass. She sat on his face and she also trampled him with her boots. He was in pain but he loved how she was dominating him. He was surprised with how turned on he was.

Mistress Celeste missed punishing her slave because she had not done it in a while. So she paid keen attention to see what he did and then find a mistake. She found a tiny mistake and she used it to humiliate him. She got him to lick her feet and smell her socks. It felt good for her although it was pure torture for the slave and who was humiliated. 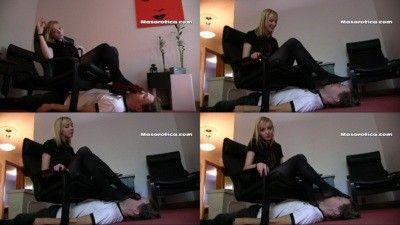 Mistress Jack and her boyfriend had a nasty argument. Her boyfriend realized he was wrong and he apologized. But she was not ready to forgive him just yet. She humiliated and degraded him for fun before she was ready to forgive him. She made him lick her high heels and she got him to lick and rub her bare feet as well. He wanted things to go back to normal so he did it all.

Mistress Natasha came home after being away for long. She did not like what she saw when she reached home. She found her slave had not been following her rules and regulations and she was pissed. She had to show him that she was still the same person so she used her heels to humiliate him. She made him lick them before she trampled him cruelly. Even him he knew he deserved the punishment.

Mistress Yolanta is not one to shy away from anything. Her friends dared her to humiliate a guy and she agreed. They even chose the guy or her but she did not object. She used her seductive prowess to humiliate him. She teased him as she jerked off and as she did so, he got hornier and hornier and more into her spell and under her total control. She got him to do all of the things that she was supposed to do to him and then some more.

Lady Karame was not going to let this loser get away with stealing from her. She had wondered how her things kept disappearing. She laid a trap for the thief and she caught him. She then caged him and left him in there for a few days before she used her boots to trample him. She treated him like a dog and she fed him like a dog. He was in pain and he was humiliated but he had learned his lesson.